Founded by Hamad Abdullateef Thunyan Alghanim in 1967, Gulf Consult is one of the oldest, established design consultancies in Kuwait. Since its inception, Gulf Consult’s directive has always been to provide all of its clients with professional consulting services delivered on time and within budget.

The company has developed a strong portfolio of significant and prestigious projects in a wide range of categories, including infrastructure, high-rise office buildings, healthcare and educational institutions, for both governmental and private entities.

Gulf Consult is able to draw upon the skill and expertise of long-serving staff members who offer specialized service that starts with the inception of the project and carries through the design, working drawings and construction supervision phases. Gulf Consult also has an extensive track record of successful work and associations with world-renowned consultants on many large projects in Kuwait.

Gulf Consult’s reputation for quality services delivered on time, sophisticated design and dedication to client satisfaction has shaped the company into one of the premier multidisciplinary consultancies in the region.

No. 79: in the world by Architectural Staff Numbers

No. 97: in the world by Architectural Staff Numbers

The Ministry of Education Headquarters was awarded, both, The National and GCC Awards for the Social, Cultural and Heritage Project of the year 2019, at the MEED Projects Awards, in association with Mashreq.

Foster + Partners in association with Gulf Consult are proud to have been awarded with the GOLD AWARD for Health, Safety and Environment HSE Excellence Award 2019 from the American Society for Safety Professionals ASSP – Kuwait Chapter, Gulf Cooperation Council GCC for HSE Excellence in the category of ENGINEERING & CONSTRUCTION.

ACI Award of Excellence for the Design and Construction Supervision for“The Ministry of Education Headquarters” .

ACI Award of Excellence for the Design and Construction Supervision forJumeirah Messilah Beach Hotel and Spa.

Our mission is to attain the trust and loyalty of our clients by providing them with high-quality professional services in planning, architecture and engineering. We achieve these objectives through our dedicated and proactive staff, our extensive knowledge in diverse project sectors, and the innovation and integrity we instill in our work.

To become Kuwait’s and the Gulf’s leading building and infrastructure design consultancy in terms of diversity of services, quality, value and customer satisfaction.

Gulf Consult from 1967 to Present

From the very beginning, the firm took on singular, unique projects and quickly developed a reputation for ethical business practices and high professional standards. The GC also began collaborating with different international consulting firms in an effort to provide clients with the best design experts and specialists. Initially, the company only provided structural and architectural services, and eventually expanded to include mechanical and electrical engineering services and later, infrastructure and landscaping. It was at this stage that the company was renamed Gulf Consult to reflect its complete portfolio of multidisciplinary services.

Today, Gulf Consult has more than 950 professionals that provide the same level of integrity inspired by the late Mr. Alghanim and is the firm of choice for large government projects. Gulf Consult prides itself on being at the forefront of development. Our work ranges from lofty office towers, innovative buildings, major highways and bridges, to infrastructure networks. As we look ahead, Gulf Consult will continue to focus on being a design pioneer in Kuwait and staying true to its foundation of maintaining the highest level of professionalism and ethics. 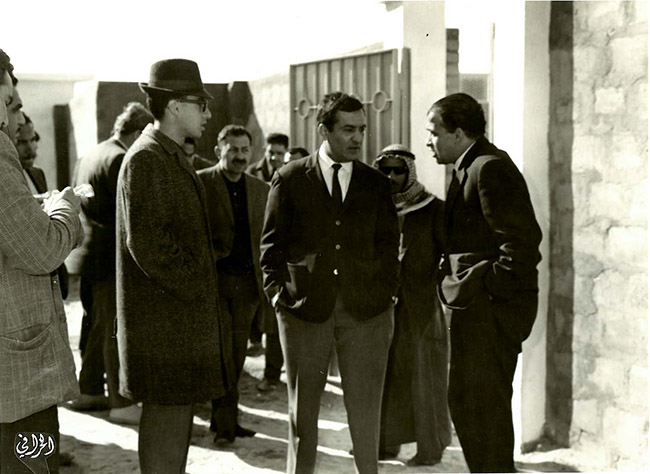 The office was established to offer consulting services for planning, architectural, structural engineering and construction supervision, which included obtaining approvals from all related statutory authorities.

The office was moved to a bigger location as the staff increased to 15 permanent staff members. At that time, Thunayan Alghanim Building was one of the most prominent buildings in Kuwait, located at the entrance to Kuwait City opposite Al Jahra Gate.

GEO was hired to build low-cost housing in Jahra.

GEO worked on a major housing project for the National Housing Authority. GEO designed and supervised 226 residential houses in Khaitan in association with an international firm that undertook the infrastructure design.

GEO was awarded the design and supervision of the Jahra to Subiya Highway.

GEO expanded the services offered by the firm to include in-house design of mechanical and electrical services. This allowed GEO to become a multidisciplinary firm, providing the full spectrum of building design services.

GEO was awarded a 2,000-unit apartment housing project at Sulaibikhat in association with OTH of France. GEO completed the primary agreement that ended at the preliminary design phase. The project was not constructed due to a change in State Policy. 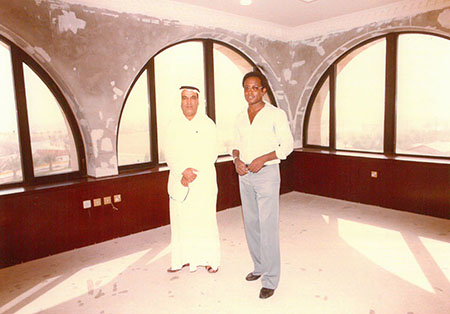 The firm changed its name from Gulf Engineering Office to Gulf Consult as the original name did not reflect the broad consultancy nature of the company. Management wanted a unique name that would reflect the multidisciplinary business and that had no similarity with any other consultant’s name in Kuwait.

GC designed and supervised the first mobile telephone stations including towers (up to 100 meters high) for SUMITOMO/NEC. Subsequently, Mobile Telecommunications Company was created and took over the project.

Establishment of the Infrastructure Department
GC in its strategy to diversify, established an infrastructure department specialized in sanitary networks and roads. 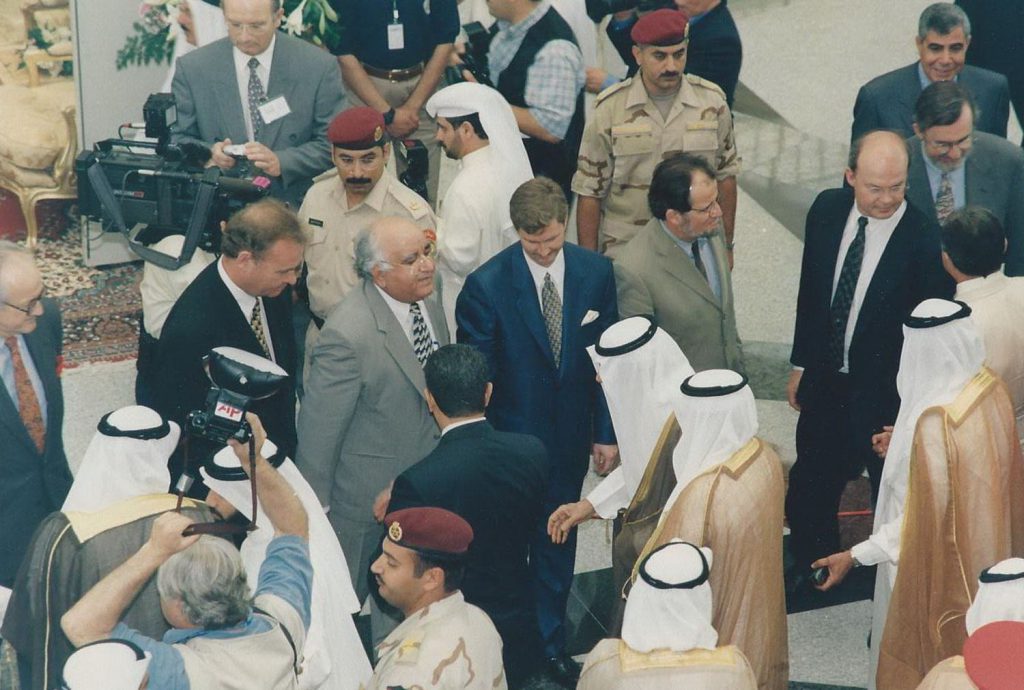 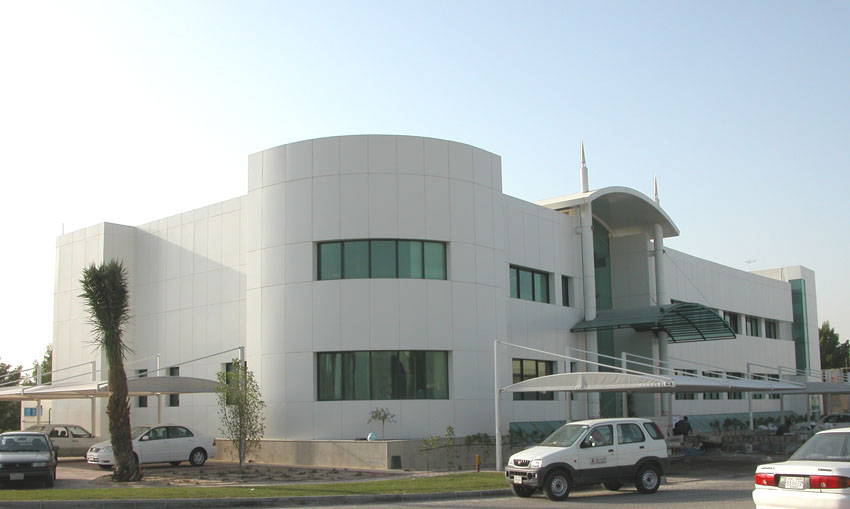 With an increase in permanent head office staff, GC decided to build its own custom design office in Shuwaikh. The firm moved into the new office in 2003 and is still located there today.

To address GC’s ever-increasing need for specialized design staff, a satellite office was established in Karachi.

A separate, dedicated office was established in Kuwait City to support the continuing need of liaising with Kuwait Government agencies and other agencies for statutory approvals. 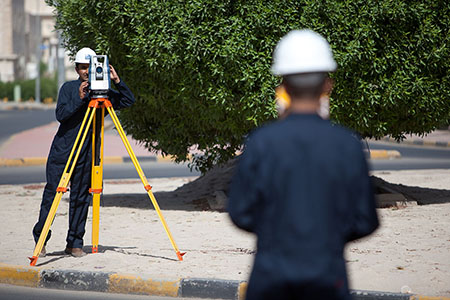 GC established a separate section committed to topographic surveying to address the increasing need in Kuwait. It caters to the needs of GC projects as well as offers independent topographic survey services to other outside entities.